It was with great sadness that we learnt of the death of David Vigo. David was best known as one half of Clifford Hocking and David Vigo presents, the most influential promotion team in Australia over the past four decades.

David Vigo was born near Plymouth, England in 1943. From an early age he expressed a love of music, an interest in other cultures and a fascination with numbers – passions that would form the bedrock of his later success as one of Australia’s most respected international promoters. In 1957 the Vigo family migrated to Australia, the first of many journeys undertaken by Vigo throughout his life. In 1960, aged just 16, Vigo moved to Melbourne where a chance encounter with Clifford Hocking, co-owner of Thomas’ Record Shop in Bourke Street proved to be a turning point in his life. A Monash University student by day, Vigo spent much of his free time attending concerts and discussing music, books, art and philosophy with Clifford and his friends at the bohemian Norman Robb bookshop.

In 1962, Vigo attended Hocking’s first two offerings as a promoter. The first, a concert  by Indian musicians Sharan Rani and Chantur Lal, the second, Barry Humphries’ first one-man show, A Nice Night’s Entertainment. In his own words, he was hooked and after several false starts working in publishing and libraries, Vigo formally teamed up with Clifford Hocking in 1965.

Over the next 40 years Clifford Hocking and David Vigo were a dominant force in the Australian entertainment industry. They promoted artists they loved and that they believed Australian audiences would embrace. In many cases they helped artists to build international careers. The work they presented was eclectic and adventurous ranging from stand-up comedy to classical music.

They were a wonderful partnership firstly because they did different things. Clifford was all instinct, all feeling, all heart. David did the mechanics. And I don’t say that dismissively. He did the arithmetic, he did the budgets with enormous detail. He did the marketing…he had all the contacts in the newspapers. He knew all the venues so when they said they wanted to have these dates, they trusted them…They were scrupulously honest.

Drawing everything together was an abiding interest in the improvisational nature of jazz, comedy and the music of Northern India, Spain, Ireland and Africa. Among the many, many acts they championed were guitarists Paco Pena, John Williams and Leo Kottke; singers Jeannie Lewis, Blossom Dearie, Cleo Laine and Christy Moore; comedians Rowen Atkinson and Lenny Henry, and musicians Stephane Grappelli, Jacques Loussier, and the Buena Vista Social Club. In 2003 they were instrumental in establishing the award-winning Soweto Gospel Choir.

Always generous with his time and knowledge David Vigo was a Trustee of Arts Centre Melbourne from 2007 to 2014. He worked closely with the Performing Arts Collection to create the Clifford Hocking and David Vigo Collection and with colleague Ian Roberts recently recorded archival interviews with many of his artists and associates including Paco Pena, John Pinder, Carrillo Gantner, Jeannie Lewis and Slava Grigoryan. When discussing his own extraordinary career with Roberts in 2014, David Vigo attributed the success of Hocking & Vigo to a very simple philosophy, “We kept ourselves small…We acted independent of government money and sponsorship…We were free. We did what we wanted.”

One of the most rewarding things about being custodians of this great Collection is seeing the surprising ways in which people engage with history to create new work. The Performing Arts Collection is a valuable resource for students, historians, writers, documentary makers, designers and other arts practitioners seeking to find out more about Australia’s rich performing arts history. Every once in a while someone comes along and re-imagines the Collection in ways we never thought possible.

Artists and avid theatre-goers, Gracia Haby and Louise Jennison visited the Research Service earlier this year and found a treasure trove of imagery ripe for digital re-interpretation. The result of their investigations can be found in two new zines, Cutting The Collection and Thumb Through which were recently launched at the Melbourne Art Book Fair at the National Gallery of Victoria. Gracia speaks eloquently about the thought process behind Cutting The Collection informed by ‘the ephemeral nature of dance; the thrill of a live performance and the trace it leaves; notions of recording what was, whilst not ever able to capture or document it fully; and the importance of such collections’. You can read more about the creative process and development here.

Not content with one remarkable publication, Gracia and Louise hit upon the idea of creating Thumb Through as both a flip book  and as a moving collage which re-energises the static images in new and unexpected ways. Both publications evoke the brilliant, always ephemeral energy captured (but not quite) in the objects left behind after the curtain has come down. 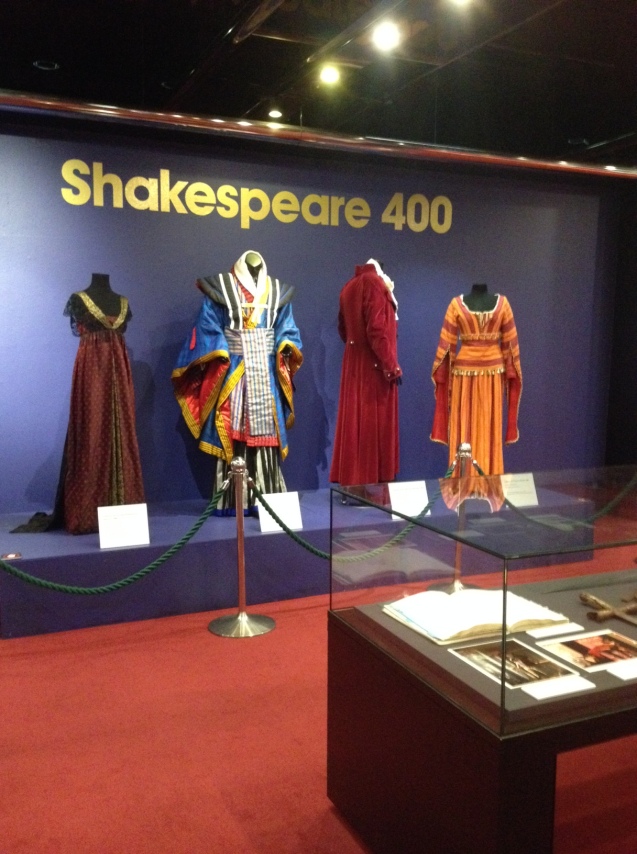 Tomorrow, 23 April marks the 400th anniversary of the death of William Shakespeare – poet, playwright and actor. Across the globe Shakespeare’s influence and legacy is being celebrated as part of Shakespeare400 with works of theatre, dance, music, art and literature inspired by the Bard being performed throughout the year.

Australians have long been enthralled by the plays of Shakespeare. The first known performance of his work in Australia is believed to be a production of Henry IV staged in Sydney on 8 April 1800. Throughout the nineteenth and early twentieth centuries Australia played host to many international Shakespeareans from Charles Kean and George Rignold to Laurence Olivier, however, only the work of local actor-managers Allan Wilkie and John Alden seemed to hint at the possibility of a permanent company. This dream was finally realised in 1990 with the founding of The Bell Shakespeare Company by actor John Bell and philanthropist Tony Gilbert.

To coincide with the 400th anniversary of Shakespeare’s death we’re sharing some highlights from our Bell Shakespeare Collection including costumes and production photographs from the company’s past twenty five years. Also on display are some very special items donated to the Performing Arts Collection by John Bell earlier this year which reflect the history of Shakespeare in Australia. These include two very fine prop swords used by 19th century Shakespearean actor, George Rignold who performed in Australia from 1886 to 1899. In true theatrical style these pieces and a number of others were passed down to John Bell by actress Amber May Cecil, whose father actor/director Captain Lawrence H. Cecil came into possession of them following Rignold’s death in 1912. 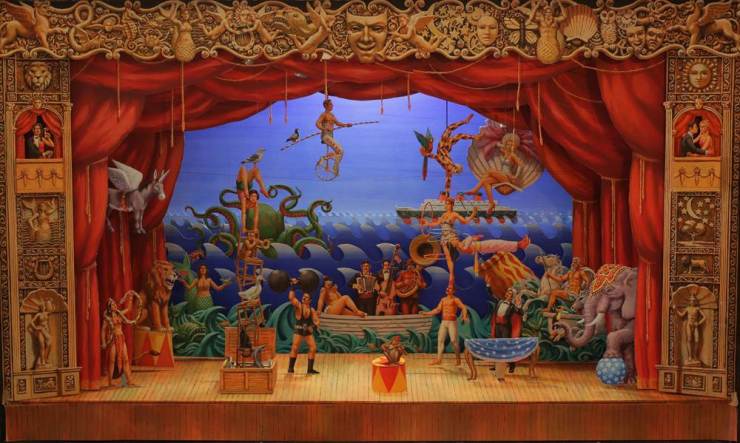 There has been quite a buzz around Arts Centre Melbourne this week with the arrival of Circus Automata, a mechanical coin-operated diorama created by Melbourne artist Mark Ogge.  The diorama is the culmination of Ogge’s lifelong fascination with set painting, circus, vaudeville, commedia dell’arte, Weimar cabaret, Renaissance painting, automata, 18th century miniature paper theatres and Daguerre’s popular diorama theatres of early 19th century Paris.  Ogge has also drawn inspiration from historical circus and performance photographs held in Arts Centre Melbourne’s Performing Arts Collection which he has studied over many years.

Within the diorama’s proscenium arch a fanciful world of some twenty-three characters including a strongman, acrobats, a human cannonball and a whimsical donkey unicorn come to life. Each figure is powered by a tiny motor and is accompanied by its own sound effect and choreography. 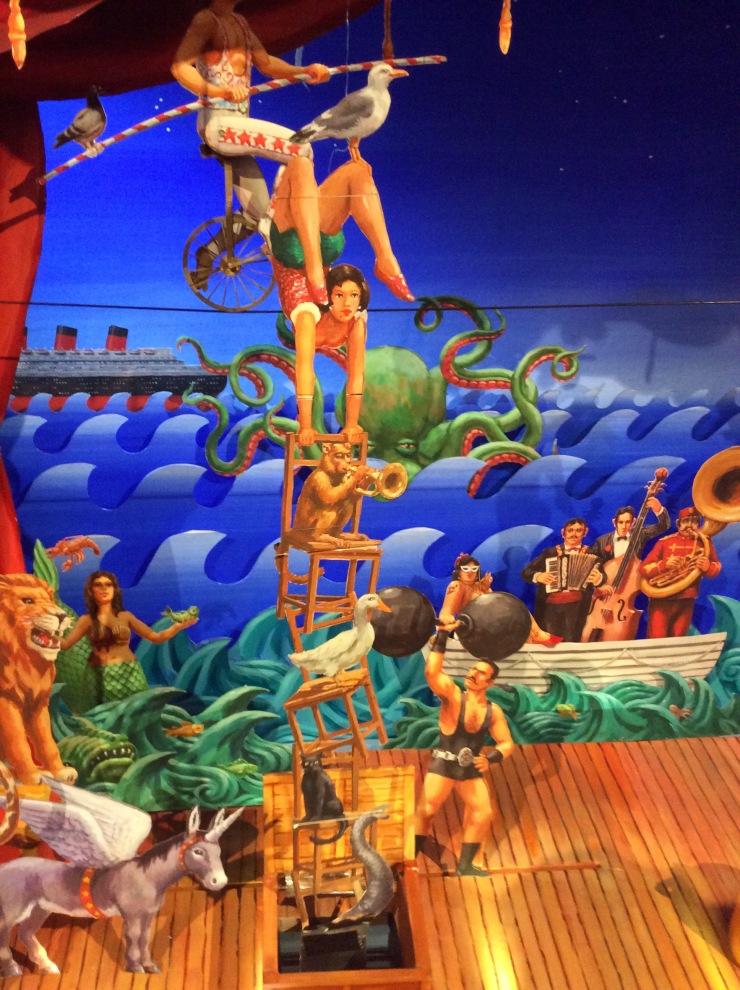 Ogge’s circus-inspired paintings and installations have been drawing gasps from audiences around the world since the early 2000s. In 2001 he designed and painted an elaborate new façade for the much-loved Famous Spiegeltent and for ten years Melbournians have watched it magically appear and disappear from the Arts Centre Melbourne’s forecourt.

Since 2006 Ogge has been the official artist of Speigelworld, an Australian-led immersive entertainment experience based in New York. Under the patronage of Australian impresario Ross Mollison, Ogge has created a series of works designed to celebrate the opening of each new Spiegelworld show. Artworks have included a monumental archway for Spiegelworld’s New York base and this three-dimensional mechanical diorama created for the opening Absinthe in 2015.

Circus Automata, accompanied by its original artwork, will be on display in Smorgon Family Plaza, Arts Centre Melbourne until 20 March 2016.

You may have heard about the new documentary on Australian film designer Orry-Kelly but did you know that he was not the only Australian to win multiple Oscars? In addition to designing for the theatre, John Truscott, designer of Art Centre Melbourne’s interiors, won two Academy Awards for costume design and art direction for his work on the critically acclaimed film, Camelot in 1967.

Find out more about the career of John Truscott here.

What a great response we have had to our new exhibition, Theatres of War: Wartime Entertainment & the Australian Experience! Thank you to everyone who has already been in and taken the time to let us know how much you have enjoyed it.

As part of the national commemoration of the Anzac Centenary we were very keen to explore the often overlooked role played by the performing arts in the lives of Australians during times of war, both on the home front and in the field. Theatres of War explores the power of performance in bringing people together, lifting spirits and offering a form of escapism during times of great adversity.

In researching the exhibition within our own rich Performing Arts Collection we were struck by how many well-known Australian performers had carried out relatively unknown war work. Performers such as Dame Nellie Melba who received her DBE for her fundraising activities during the First World War and Norman Hetherington (aka Mr Squiggle) who entertained his fellow soldiers in the jungles of New Guinea during the Second World War. More recently singers Kylie Minogue and Doc Neeson, and comedians Hamish and Andy have provided a morale-boosting connection to home for soldiers on active service.

Many of these performers have generously lent material for inclusion in the exhibition and we are thrilled to have on display the famous piano used by Australian prisoners in the Changi prisoner-of-war camp during the Second World War, courtesy of the Australian War Memorial.

The exhibition continues until 20 September 2015.