What does the music of The Beatles mean to you? Do you remember Beatlemania in Australia? What is your favourite Beatles song?

We’ve been asking these questions of visitors to our current exhibition, The Beatles in Australia. It’s been wonderful to read through all the comments that have come flooding in. From people who attended the 1964 concerts to people weren’t born until decades later, it appears that Beatlemania is still alive and well in Melbourne today!

We’d love to hear about your experiences too – leave a comment here or head to Arts Centre Melbourne’s Facebook page to join in the conversation.

Comments from visitors to The Beatles in Australia 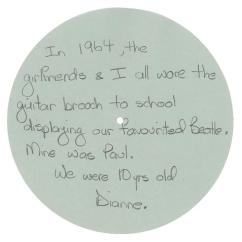 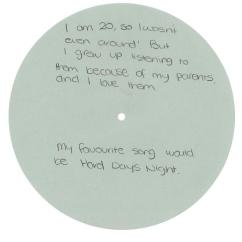 This week we proudly opened ‘The Beatles In Australia’ exhibition, the result of a two year collaboration between Arts Centre Melbourne’s Performing Arts Collection and the Powerhouse Museum, Sydney. The exhibition celebrates the 50th anniversary of The Beatles one and only tour of Australia in 1964  and presents the sights and sounds of Beatlemania — the arrivals, the press conferences, the concerts and the screaming fans – through newsreel footage, television reports, radio coverage, fan letters, magazines and press clippings.

So far the response has been overwhelmingly positive as visitors have streamed into the centre to re-live the heady days of 1964 or to find out what all the fuss was about. One of the great highlights of the exhibition is the opportunity to explore many of the original documents kept by Australian promoter Kenn Brodziak. Now part of Arts Centre Melbourne’s Performing Arts Collection, these handwritten and typed letters, notes, telegrams and documents provide a fascinating glimpse into intense planning undertaken in the days and weeks leading up to The Beatles’ arrival in Australia. The fan experience is also well represented with a diverse range of early Beatles merchandise, handmade signs, diaries and scrapbooks sourced from both collecting institutions sitting alongside memorabilia and memories elicited from fans and private collectors.

So come in and be seduced by the Fab Four all over again or head to The Beatles In Australia exhibition website for further information or Arts Centre Melbourne’s Facebook page to join in the conversation.

The Beatles In Australia