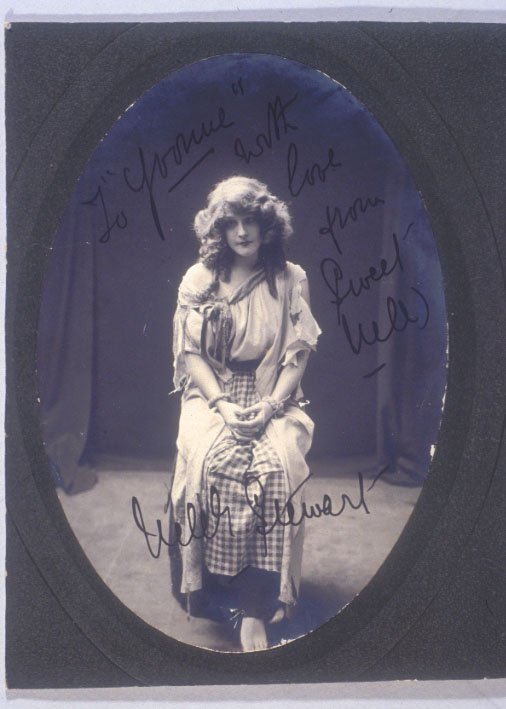 This week marks the anniversary of the horrific 1906 SanFrancisco earthquake and fire that left much of the city in ruins and an estimated 300,000 people homeless. Caught in the mayhem that followed were Australian entrepreneur George Musgrove and Nellie Stewart, star of pantomime, light opera and drama, whose beauty and talent won the hearts of the Australian public at the turn of the twentieth century.

Nellie Stewart was a star of the Williamson, Garner and Musgrove’s Royal Comic Opera Company and throughout the 1880s performed in many of their productions including Patience, La Mascotte, HMS Pinafore, Iolanthe, Dorothy and Princess Ida. When Gilbert & Sullivan’s The Mikado premiered in Australia in 1886, Nellie Stewart was the obvious choice to play the lead.

Buoyed by her singing success, Nellie Stewart attempted to make the transition to grand opera in 1888 taking on the role of Marguerite in Gounod’s Faust. Her success in the role was unfortunately marred by severely strained vocal chords, the result of unwisely singing the role for 24 consecutive nights. Vocal problems continued to plague her and the damage was compounded by further years of singing.

At age 43, Nellie Stewart decided to reinvent herself, this time as a dramatic star. As fate would have it her first non-musical role would also become the one for which she is best remembered. The play was Paul Kester’s Sweet Nell of Old Drury which premiered on 15 February 1902 at the Princess Theatre. The role was that of Nell Gwynne, a real-life rags-to-riches story of a poor ‘orange seller’ turned actress who became mistress of King Charles II.

Nellie’s gamble paid off with sell-out performances and rave reviews following around the country. On the back of its success Nellie and her partner, entrepreneur George Musgrove took the ambitious step of sailing to San Francisco to undertake an American tour of Sweet Nell of Old Drury.  They arrived early in 1906 with a full dramatic company, stagehands, scenery, costumes and props.  The production and its star were an immediate success and following a successful season, Nellie and daughter Nancye travelled on to Colorado Springs while George remained in San Francisco organising further tour dates.

When the city was struck by an earthquake and ensuring fire on 18 April, Musgrove was caught in the midst of the devastation. A week later, ragged and battered, he made his way to his worried family. Scenery was destroyed in the disaster and the Sweet Nell tour had to be abandoned. It was a financial loss from which George Musgrove and Nellie Stewart never fully recovered. To enable the company to return to Australia, they sold their home in England and Nellie sold all her jewellery.